“The E-Bike diaries”, is a six to seven month’s expedition that will be heading north through seven South American countries: Chile, Argentina, Bolivia, Peru, Ecuador, Colombia and Venezuela. It is equipped with two Swiss Made state of the art Flyer electric bikes. Six different travel companions, four photographers, a journalist and an ecologist, will cover sections of the journey together with photojournalist Luca Zanetti. Inspired by two previous travelers Ernesto Guevara Serna alias Che and his companion Alberto Granado, the route begins in Santiago de Chile with the aim of reaching Caracas in Venezuela. The object of “The E-Bike diaries” is to document in photographs and texts as well as videos the rich and diverse cultures of the people who inhabit the area, their hopes and struggles with a focus on the effects of climate change.

They rode on what they called a carburised version of Don Quixote’s Rocinante horse: a 1939 500 CC Norton motorcycle, la Poderosa (The Mighty One). As described in the Che’s famous Motorcycle Diaries, it is half-way through their travel, in Southern Chile, that the Poderosa gave up: “It was our last day as motorized bums; the next stage seemed to be more difficult as bums without wheels.”

Much less well known is that Che Guevara, aged 22, went to visit Alberto Granado on a 4.500 km journey that started in Buenos Aires on an Italian made Garelli bicycle fitted with a baby Mosquito engine (a sort of Velosolex).

This made me speculate about the plausibility to see both Che Guevara and Alberto Granado on an e-bike, instead of a conventional petrol operated motorcycle, were they to leap into the future, and embark on the same journey today. The e-bike apart from being one of the coolest inventions of the age is an ideological choice. It reminds us of today’s crucial struggle, for both man and nature and not between man and nature. It stands for the construction of a more energy efficient and less resource intense economy, for a change against the economic imperative of endless growth or certain death.

Climate change, air pollution, the greenhouse effect, the galloping loss of biodiversity, the rising of sea levels the acidification of the oceans, the destruction of the Amazon rainforest, their own carbon footprint: none of these topics were probably on the list of things Che Guevara and Alberto Granado worried about. As men of their age their sensors were calibrated on social injustice, that is persisting in many parts of South America. In the form of stark contrasts in land and wealth distribution. What has changed positively since Che’s time is that in most countries the armed struggle to overthrown authoritarian rulers has ended. Many of the people that fought authoritarian regimes indeed where jailed and tortured by them are now in power in democratically elected governments.

Che Guevara changed the world at the end of his life journey. “The E-Bike diaries” hopes to change it too, if only by inspiring people to switch from a car to a bicycle. This may sound like a watered down ambition, it isn’t. The relentless burning of fossil fuels is frying the planet and it is urgent that we do something about it now!

It is in this spirit that we’ll name our e-bikes the Poderosa I and Poderosa II. 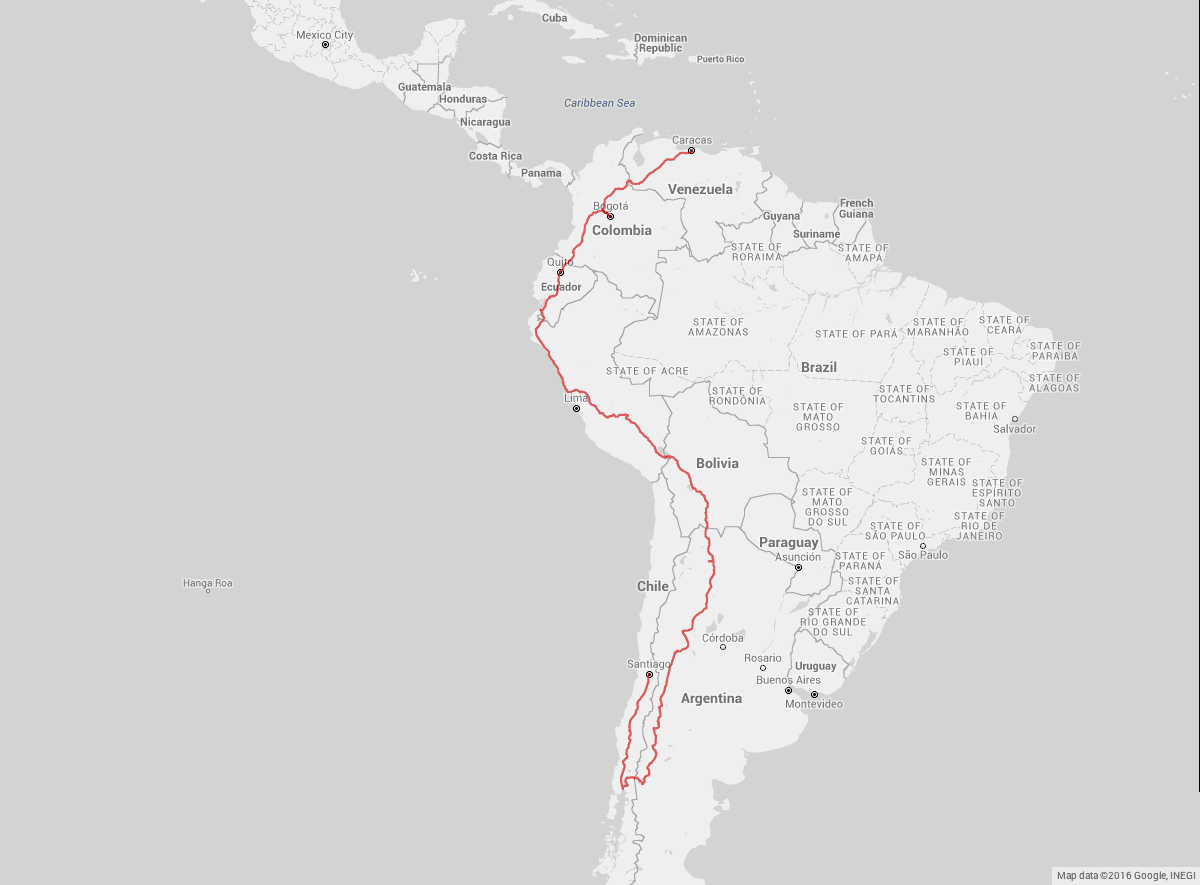 The last weeks of cycling in Colombia from the southern border of Rumichaca to the capital Bogotá, have been wonderfully mesmerising. On our way to the Laguna de La Cocha, we passed with almost no visibility trough the thick cold fog enveloping the paramo the Bordoncillo where we managed to catch a glimpse at the stoically standing Frailejones.

In the Putumayo department on a road called the death trampolin, that cuts trough the dense cloud forests between the valley of Sibundoy and Mocoa. We marvelled at the explosion of biodiversity and about humans and their ability to move absolutely everywhere regardless of obstacles.

The endless view surrounding the lowland jungle town of Mocoa filled us with that special hope that you get from an empty landscape. The hope that there can be a new beginning.

On June 22 the day the Colombian government, and the oldest insurgency in the Americas the Farc signed a permanent cease-fire. I was hoping to make a symbolic image of the historic moment, instead a lone red cow appeared out of nowhere for a few seconds, on a mountain pass between the Cauca and Huila departments. This made me hopeful for the Colombian peace process even if, most people I talked to on the road were sceptical.

In the town of San Agustin we saw the incredible monolithic sculptures representing the gods and animals of a culture that flourished between the 1st and 8th century but of which little else is known.

We had our first sight of the mighty Magdalena River in San Agustin at the beginning of its journey of more then 1500 Km, towards the Atlantic Ocean; and didn’t lose sight of the river until the town of Honda 500 Km later where we started to climb towards Bogota.

We had a scary moment at a bus stop in the town of Pitalito when (while changing a chain), we overheard a couple talking about the possibility of being caught on a nearby CCTV camera if they where to rob us.

We stopped in Villavieja to see the Tatacoa desert. From there we placed our FLYERS on the boat of fisherman Rolando Rojas to navigate the Magdalena for a few hours and cross into the neighbouring Tolima department.

The Odometer marked 11.000 Km when we crossed a hilltop from Subachoque and saw the town of Tabio about 40 Km from Bogota. 205 days had passed since we started in Santiago de Chile with my mother Pia back in December 2015.

The density and speed of all this is difficult to process. I found that at first what happens on the road stays on the road. It’s only in retrospect when you look at the images taken or write about what you have experienced that you can somehow appropriate the experience with a degree of normality.

Now back in Zurich after returning the FLYER to their owners, I’m on my old mountain bike again, on my first trip out to the super market I was fined 60 francs for passing a red light.

THANK YOU FOR FOLLOWING!

After cycling on the FLYER in Ecuador from Loja to Quito, Colombian photographer Juanita Escobar has now headed to Mexico on a work mission. Thank you Juanita ! The eBike diaries now continue together with Jason Baumann. The mission is to reach Colombia’s capital Bogota where the journey will come to an end. My friend Jason is a Swiss entrepreneur that has been based in Rio de Janeiro with his architect girlfriend Barbara for years. I owe Jason a big THANK YOU! for helping, together with Anne Oskam in the construction of the eBike diaries website. Welcome Jason!

After crossing together the entire length of Peru and a bit of Ecuador from Puno to Loja, Alex Kornhuber will now go back to his home in Lima, where his girlfriend Fiorella and their Dog Chasca Ñawi are waiting. My friend Juanita Escobar that has just arrived to Loja from Lima with two brand new back wheels for the FLYERS will take over tomorrow. I met Juanita a Colombian photographer by chance last year; while working in Colombia’s eastern plains on a story about cowboys. There she was a woman among hard men. I thought if you enjoy the life of the cowboy chances are that you might like the idea to cycle on an eBike trough a stretch of South America. She jumped on the idea! Her incredible work can be viewed here: www.juanitaescobar.com